Have you visited? --Temples of India (Part 1)

As we are about to enter in 2018, We must be excited to travel and see new places for sure!!

I have compiled few amazing Temples #TemplesofIndia  (twitter #) and places in India , posted by   प्रेम और आनंद‏ , @PremYadav. (I thank him for allowing to use the picture in my blogs.)

Lets have a look and make an effort to visit this places to experience the ultimate peace, architectural beauty , service , devotion of this temples and places , which our ancestor has built and left for us to cherish. 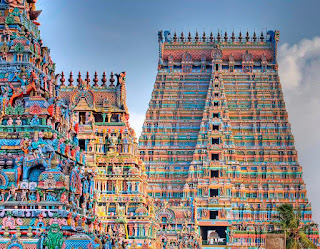 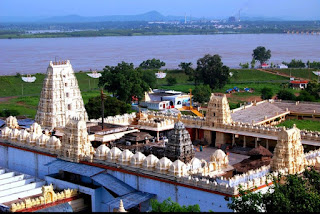 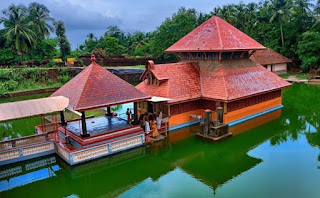 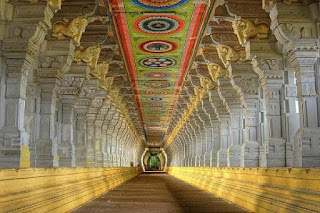 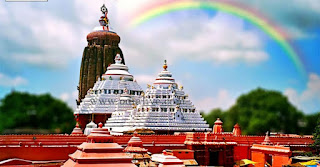 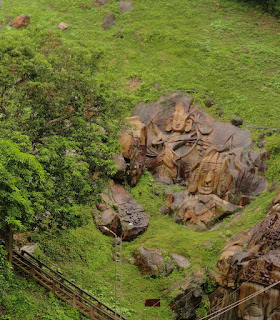 They say the world was once plain 'black & white.' Then, one day, God created India!

Posted by Satender Kumar Mall at 08:17 No comments:

A Spiritual look at TIME & SPACE

Time is Human idea. If you have got time then definitely there is space too.

The ordinary laws of physics, operating within time, are inherently unable to explain the beginning of time.

The Vedas, the earliest texts on Indian philosophy and Hindu philosophy, dating back to the late 2nd millennium BC, describe ancient Hindu cosmology, in which the universe goes through repeated cycles of creation, destruction, and rebirth, with each cycle lasting 4,320,000 years.

As Sadhguru asks that:

Have you ever experienced a yesterday or a tomorrow?

Time and space are essential dimensions for physical creation.

To be continue...
This blogs has been compiled out of interest after reading various sources such as wiki, Sadhguru teaching and few stanzas of Vedas.
Posted by Satender Kumar Mall at 11:44 No comments:

Kubernetes is an orchestration tool for containerization technologies such as dockers.

A single dockers server can be managed using docker itself but when we need multiple dockers server management from single software to build a highly available dockers cluster, then we require an orchestration like Kubernetes.

Secrets: is an object that contains small amount of secret data such as a password, a token or a key. It belongs to specific kubernetes Namespace.
It reduces the risk of exposing sensitive data to unwanted entities.
It is created outside of Pods same like ConfigMaps. The size of secrets cannot exceed 1 Mb.

Secrets are registered with Kubernetes Master. It can be mounted as volume (i.e flat file) or exposed as environment variables.

Secrets is only sent to the Node hosting the Pod that requires access.

To view all the secrets:-

For UI based Kubernetes references. 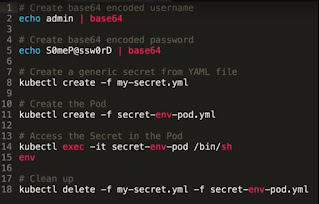 In January 2014, I had assembled information on similar topic as part 2, Here is continuation of few more great Indians of ancient India as part 3.

Brahmagupta was an Ancient Indian astronomer and mathematician. He was born in the city of Bhinmal in Northwest India. His father, whose name was Jisnugupta, was an astrologer. He introduced negative number and operations on zero into mathematics.

He was the first person to discover the formula for solving quadratic equations.

Bhaskaracharya’s ‘Siddhanta Shiromani’ is considered as the pinnacle of all the astronomical works of those 700 years.

He accurately calculated the time that earth took to revolve around the Sun as 365.2588 days that is a difference of 3 minutes of modern acceptance of 365.2563 days. This was much before Leibniz or Newton could come up with Differential or Integral Calculus and to explain the forces of gravity. He was the first to conceive the Differential Coefficient and Differential Calculus.

Bhaskaracharya was a teacher, mathematician and an astronomer. He also headed the Astronomical Observatory in Ujjain that was the learning center of India. His contribution to Astronomy and Mathematics in the 12th century was unparalleled and significant.

Tulsidas did not cry at the time of his birth. He was born with all the thirty-two teeth intact. In childhood his name was Tulsiram or Ram Bola.

Tulsidas wrote twelve books. The most famous book is his Ramayan—Ram-charit-manas—in Hindi. He wrote this book under the directions of Hanuman. This Ramayan is read and worshiped with great reverence in every Hindu home in Northern India. It is an inspiring book. It contains sweet couplets in beautiful rhyme. Vinaya Patrika is another important book written by Tulsidas.

Posted by Satender Kumar Mall at 07:07 No comments:

Our desi words - which made to Oxford Dictionary in recent past!

In recent past, if you happen to browse oxford Dictionary online or its hard copy, you may have noticed few Indian desi words.

Yes, don't be surprise as trend in on reverse. If you happen to be English business journal reader - Indian desi words like 'guru', 'mantra', 'dhaba', 'aiyo', 'loot' etc you surely will already be familiar with.

Following are few Indian (Hindi) words which is already popular in Britain crowd too have manage to find its place in Oxford. 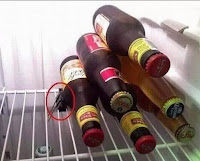 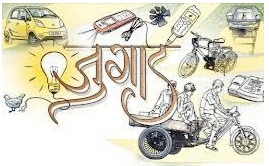 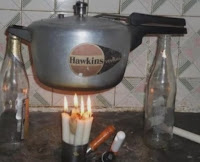 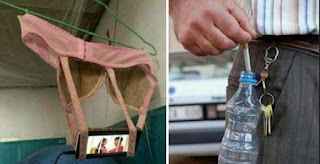 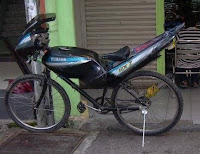 Posted by Satender Kumar Mall at 11:46 No comments:

Memory - Does it define Human?

"Leave the dead to the dead"

Whats comes to your mind? When you read the line in pink.

Surely it is very insensitive or not so compassionate statement.

You must leave the dead to the dead otherwise they will crawl up from the earth and live through you...If you allow them to dominate your system, you will become a bundle of compulsions. 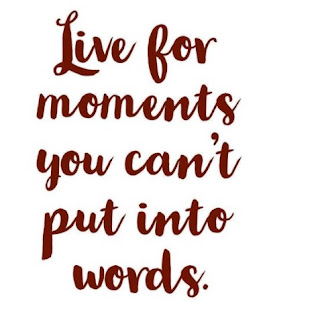 What it has got to do with memory?

But if you think bit more it’s the most profound statement as well. There are many level of memory.

I had read somewhere that by doing 'YOGA', At least eight kind of memory can be mastered.

It is told that through yoga, one can touch those 'aspect' of intelligence which is beyond memory. Beyond memory means beyond boundaries also.

Memory is both possibilities as well as limitation. 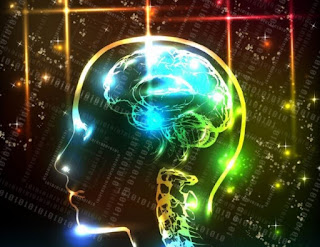 As a person , if we do not make use of Conscious & Karmic memory enough to lead fresh life, or create/innovate something new/better, with age genetic memory will overpower.

May be that's the reason , why people end up relating each other incident with their ancestor.

Only Human being has power to leave the dead to dead. As for other creature, anyway they will play through them.

We may identify each other through shapes & forms but its memory which signals the 'identify' pulse to identify.

So its sounds like it will not be wrong, if we say difference between one person to another is memory.

Shed tagline "I am busy!"

Today’s world, one of the greatest challenge-we face- is of having ‘too much’ of information but we don’t really know what to do about it.

Information about anything & everything is easily available in digital platform, that keep us engaged in mining more and more on daily basis.

Have we ever thought why we are mining it religiously?

What goal we are trying to achieve out of it?

What are we loosing or gaining in this mindless race of ‘knowing more’ and utlising rare few?

All we have been able to figure out as response to above queries is sweet and classy excuse: I am (very) busy these days!! 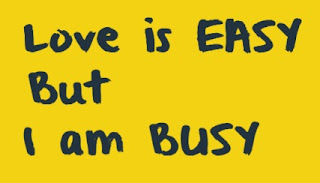 So what we can do about it!!

Ingredients that can make one happy-

We can make ourselves happy by focusing energy & time towards what will make us happy, including working (Money) but just in different way.

Start will happen by clearing down our mind. It’s not easy but when you put in prospective, it is possible.

Our mind is occupied by points which can bring us joy! More at the same time it also has few points which annoy us. But we end up doing those annoying thing in social pressure or as mandatory norms of our routine.

Now that the few points, which eats up our time & energy and we are left with no time, hence an excuse “I am too busy”!!

We have to make an effort to clear-up those ‘annoy’ to make room for joy and time for yourself so that you can do-meet-chat with those who care about you & vice-versa!

3.    Try to be honest & polite, when declining annoy as well as well in advance.

4.    Remember 'not' to commit to annoy points and decline at last moment, which is far worse, and you may be seen as stupid/unreliable/add any common slang of your preference.

Sample done for you!

You have already saved time for yourself to spend with people who cares about you and you are happy to be with them. 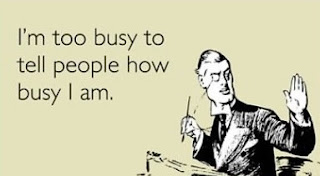 Research have stated that people who are always with “I am busy” tagline are ‘unpleasant person’ and are more likely to be suffering from acute depression and future loneliness.

On lighter note:-
Hey any link about the research you are referring to?
Sorry guys, I just made it up!! But if you continue with tagline, do pass me your details in comments -- surely you can be the subject of case topic. 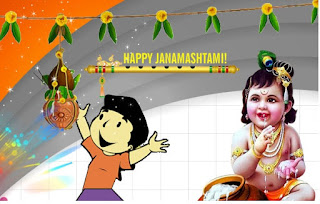 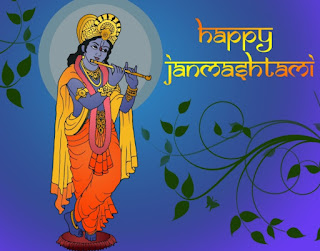 Posted by Satender Kumar Mall at 09:51 No comments:

Back in 2013, October - I had written a blog related to Fear named:

Fear - Which type is considered to be greatest by human!

We all have a habit of setting goals in life and work toward achieving it.

On lighter note – “depending on which age group we are in” sometime end of setting few more goals to achieve the earlier goals & life goes on…..

We always meet various people on our daily routine life; we talk and share good, not so good experiences, few inspire us, other we ignore & again life goes on….

Have we ever thought why not lets define our fear instead of our goals?

What? Isn’t it strange?

Yes, it does sounds strange because majority of us might have never tried it so far…and surely have pulled ourselves back due to it and probably got into cycle of setting and re-setting goals. 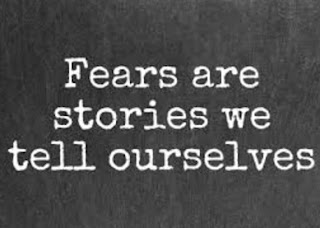 Seneca the Younger (c. 4 BC – AD 65) who was famous Roman Stoic philosopher had rightly pointed out that:-

“We suffer more often in imagination than in reality”

It is really interesting and worth trying , in case you have monkey mind.

Posted by Satender Kumar Mall at 14:31 No comments: