Once the four Pandavas (except Yudhishthira who was not present) asked Krishna:

"What is Kaliyug and what will happen during Kaliyug?" 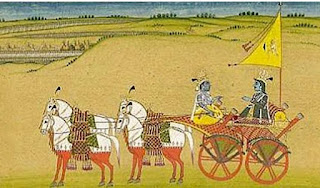 Krishna smiled and said "Let me demonstrate to you, the situation of Kaliyuga." He took a bow and four arrows and shot them in four directions and ordered the four Pandavas to go and bring them back.
Each of the four Pandavas went in the four different directions to search for the arrows.
When Arjun picked an arrow, he heard a very sweet voice. He turned around and saw a cuckoo singing in a spellbinding voice but was also eating flesh of a live rabbit which was in great pain. Arjuna was very surprised to see such a gory act by such a divine bird he left the place immediately.
Bhim picked arrow from a place, where five wells were situated. The four wells were surrounding a single well. The four wells were overflowing with very sweet water as if they were not able to hold water and surprisingly the well in the middle of these four overflowing wells was completely empty. Bhima was also puzzled at this sight.
Nakul was returning to the place after picking up the arrow. He stopped at a place where a cow was about to give birth. After giving birth the cow started licking the calf but continued to lick it even after the calf was clean. With great difficulty people were able to separate them and by that time the calf was injured badly. Nakul was puzzled by the behaviour of such a calm animal.
Sahadeva picked arrow which fell near a mountain and saw a big boulder falling. The boulder was crushing the rocks and big trees on its way down, but the same boulder was stopped by a small plant. Sahadeva was also amazed at this sight.

All the Pandavas asked the meaning of these incidents. Krishna smiled and started explaining...
"In Kaliyug, the priests will have very sweet voice and will also have great knowledge but they will exploit devotees the same way cuckoo was doing with rabbit.

In Kaliyug poor will live among rich, those rich will have enormous amount of wealth which will actually overflow but they will not offer a single penny to the poor same as the four wells didn't have a single drop of water for the empty well.

In Kaliyug parents will love their children so much that their love will actually spoil them and will destroy their lives similar to the love shown by cow to her newborn calf.

In Kaliyug people will fall in terms of character like the boulder from the mountain and they will not be stopped by anyone at the end only the name of God will be able to hold them from doom like the little plant held the boulder from further fall."