Fear: Which type is considered to be greatest by human!


Common synonyms of fear as suggested by English dictionary are angst, scare, fright, qualm, phobia, timidity to name few. In our day to day conversation one way or the other we do pick any of similar words to describe happening/incident which falls under its boundary. Fear has its own level & stage. Human being embraces it with age and situation. 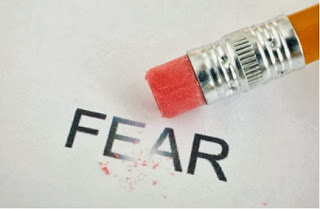 New born baby starts sensing fear around six to seven months, when she/he starts realizing that they are actually his/her own person. School going children fear about examination/homework related activity. New graduates fear about their first step to business horizon. The Farmers fear about imbalance between growing crops and rain. The politician fears about the coming elections. So in larger sense fear and human thinking are somewhat closely related. Growth brings happiness but fear of fall constantly occupies considerable percentage of human mind.

But one thing which is certainly be granted to all kind of living creature i.e. DEATH but as world is becoming unrest by passing days, I can assume that many really do not fear death any more. What do you think? Got an opinion? Please suggest in comment section for wider audience benefits.
Based on quite few research/findings in context to fear which I came across so far, I can conclude that the greatest fear among all which human being gets impacted are :-

Let’s look at some facts; Arie Kruglanski, who is one of the leading investigators of global terrorism concluded as part of Terror management research along with his colleagues at the National Consortium for the Study of Terrorism and Responses to Terrorism, which I have quoted below
"Personal significance is a motivation that has been recognized by psychological theorists as a major driving force of human behavior. Terrorists feel that through suicide, their lives will achieve tremendous significance. They will become heroes, martyrs. In many cases, their decision is a response to great loss of significance, which can occur through humiliation; discrimination or personal problems…Interesting[ly], research shows that poverty is not the root cause of terrorism. Many terrorists come out of the middle class, and some [like Osama Bin Laden] are quite well-to-do."

Surely we cannot eliminate the above mentioned factors but surely we can work out on strategies to minimize them from inhabiting our minds. To work out any strategy or workable solution, the key is to know the root cause of its origin.

When people feel humiliated?
Few tip-offs could be such as failure to anticipate change as well as upgrade ourselves; World is moving toward globalization and with similar pace toward making wealth by any mean. Person might feel humiliated if he/she has no/little wealth but wisest knowledge of this world [which is not considered status any more] i.e. means the goalpost of status has shifted from knowledge to worldly materials.

Why people get to a point of feeling insignificant?
Few steer could be clearly mismatched of skills and demands. . Even when Mahatma Gandhi returned India after completion of law studies from London, his skill was insignificant because the Indian law was different to that of European law. He could not establish himself at one go but what’s more vital he did was keep marching instead before he got contract to work in Natal, South Africa.
Working hard to “be someone” but times passed away in search of right platform. One person worked hard to demonstrate worth but at final stage someone else took-off credit. The dejected feeling of being second in life where first one is too shiny that world hardly notices the latter.  Many more the list is never ending…..

Few workable strategies:-
Fear: False Evidence Appearing Real
Slight change in our thinking can help us to bring greater glory to human being civilization. Life is for living which is more important than always being plunge into mathematics of gain & loss. Plan your life in smaller milestone and after each accomplishment of milestone; enjoy its beauty before rushing for another. It helps in refreshing you with new thought, energy, positivity and more motivation to conquer further.
Look back & consider ourselves lucky to be a part of world which has so many differences, like/dislikes as it provides you an opportunity to be yourself. If you ever feel insignificant/ humiliated take it an opportunity to re-organize your strength. There are historical evidences that even strong and invincible warrior also upgrade/filter their weapons to become relevance with changing times. Everyone will reach to their goal but important is to keep marching. If you face humiliation/insignificance it is a signal that initial blueprint to achieve goal needs revisit.
If none of strategy seems to impress you then just think you are important that’s why you are part of this world & you will get something.

Never be afraid to try something new. Remember, amateurs built the ark, professionals built the Titanic.